Well while Linux being one of the largest used open platform on earth, what makes it so popular? Yes, anyone can contribute improvising it. One of the main task of users and developers is to take and share screenshots and screen recordings to share across forums, emails for discussion on improving the Ubentu Linux platform. In this post you will learn simple ways on How to Take Screenshots (Print Screen) on Ubuntu Linux? updated with all the versions including Gnome in year 2018.
You may need to take screenshots for different reasons as well as may be complete screen or some part of window, edit them on the fly or just share it on the fly?
And I know this can be done at a click or voice command or using Apps on Android or iOS, while it comes to Linux, you will be able to use standard methods of using keys as well as many special tools assisting you to take screenshots which have different flexible options which you will learn on this web page.
Most of these tools will not only facilitate taking screenshots with ease but also allows you to modify the screenshot for adjustment of borders, depth, color and do a lot more after capturing screenshot of a particular application or a whole window or partial window.
While you will get thousand different programs and tools online to take screenshots on Ubentu, I will be focusing on few of them which are popular and flexible packaged with many features they provide.
Lets see and learn various ways to take printscreen or screenshot or video (screencast) —

How to Take Screenshots (Print Screen) on Ubuntu Linux ?

How to copy the screenshot to Clipboard?

— Simply hold down Ctrl with any of the above shortcuts to copy the screenshot image to the clipboard instead of saving it to local device. Once on clipboard you can simply use it on the fly to paste it into any other application directly from the clipboard.
Note : While you use these shortcuts, in Linux desktop environments like KDE Plasma, Gnome, XFCE, system will either take a screenshot or will start a program for taking screenshots.

Where to find PrtScn key in Linux?

Well its easy to locate the Print screen keys on your keyboard, just look at the upper right corner of the keyboard.
Just remember that the “Print Screen” key may be written as PrintScreen, PrntScrn, PrntScr, PrtScn, PrtScr, PrtSc or a similar abbreviation, this may vary depending upon the keyboard make and which part of world you are located in!
Go to Index

Method 2 : How to screencast on Linux?

Sometimes only screenshots may not help since you may need to demonstrate a process which generated the error or bug or maybe part of the game you are playing! who knows?
So you can learn making a  video recording of what is happening on your screen using basic key combinations.
Lets see them Step-by-Step:
1) Press Ctrl + Alt + Shift + R keys together to start recording what is happening on your screen.
2) You will see a red circle on the top right corner of your screen when the recording is in progress.
3) Once done, you can Press Ctrl + Alt + Shift + R keys again to stop the recording.
4) The video will be automatically saved by system into Home folder >> Videos folder [ with a file name that starts with Screencast that includes the date and time it was taken.]
Note : If your device do not have a Videos folder, the videos will be saved in your home folder instead.
Go to Index

You can use gnome-screenshot utility which is built-in the GNOME Desktop Environment, to take a screenshot.
You can either use the graphical interface or from command line mode (gnome-screenshot)
You can Launch the screenshot tool as shown in below image — 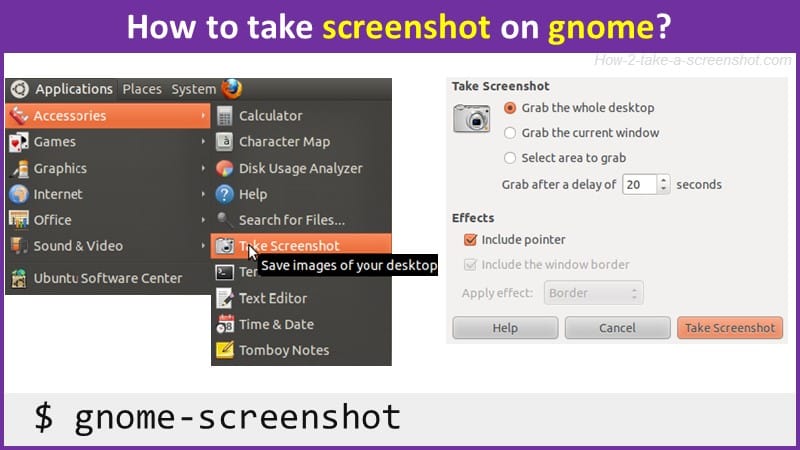 To capture the Entire Screen:

To capture only Current Window:

From the UI as shown above, select “Grab the Current Window” and click “Take Screenshot” to take the screenshot of the current active window alone.
Alternatively : From the command-line:
Use the command $ gnome-screenshot -w

To capture a Screenshot with time Delay:

From the UI as shown above, Set the “Grab after a delay” to the required number of seconds, mostly helpful while you take screenshot of navigation or video.
Alternatively : From the command-line:
Use the command $ gnome-screenshot -w -d 2
for an example -d 2 is used for delaying the screenshot for 2 seconds.

From the UI as shown above, select “Grab a Particular area” and click “Take Screenshot”  this will allow you to take a particular rectangle area of the screen.
Alternatively : From the command-line:
Use the command $ gnome-screenshot -a
After you enter this command, the mouse pointer will be changed, then you can simply drag and select partial area of the screen to take a screenshot.

To include or exclude Window Border:

ImageMagick is one of the best and powerful open-source software suite used for editing, converting and displaying image files in more than 200 image formats.
You can use it for taking screenshots of selected portion of the screen.
Good part is that imagemagick also includes a native X-window GUI for Unix-like systems which helps make rendering of images easy. It is licensed under Apache 2.0 License.
Imagemagick also provides a number of bindings for various languages like: PerlMagick (Perl), Magickcore (C ), Magick++ (C++).

use apt-get on debian/ubuntu : $ apt-get install imagemagick
Using imagemagick, you can take screenshot in the following ways:

You can capture the entire screen using the “-window root” option.
$ import -window root Pictures/Image6.png
This command takes the screenshot of whole screen with all active windows and save in the file name & location provided by you in the command.

$ import Pictures/Image7.png
Running this command converts mouse pointer into “Cross” symbol which can be clicked and dragged in window shape to select partial area of the screen and take screenshot of particular area.

4) Include the frame in screenshot:

$ import -frame Image8.png
Running this command, you can include the “frame” of the window.

$ import -window root -resize 640 -pause 4 Pictures/Image9.png
Running this command, you can take screenshot and resize the screenshot. Pause option can be used to make a delay before taking the screenshots.
Tip : You can refer “man import” for more number of options supported by the import command.
Go to Index

Once you are ready with installation of shutter tool.
Simply open a new session by launching the shutter app, or select the window to capture from the shutter icon in notification bar.
Go to Index

Beauty of Kazam tool is that it can be used for video recording as well as taking still screenshots.
Also good part is availability of a GUI which can interface to provide you easy to choose options for screencasting or taking partial or full window screenshots.
Other thing which I like the most is its silent mode, which allows to start screencasting without GUI.
Kazam was the first secreencaster with on the fly encoding and screenshot feature.

How to take screenshot using kazam?

Look at the available GUI, which is so simple.
With a click of button you will be able to select any one of the four options which are —
Fullscreen, All Screens, Window, Area and select capture.
When you select an area selection, system allows you to select the specific area, once done, you can simply press Enter key to capture. 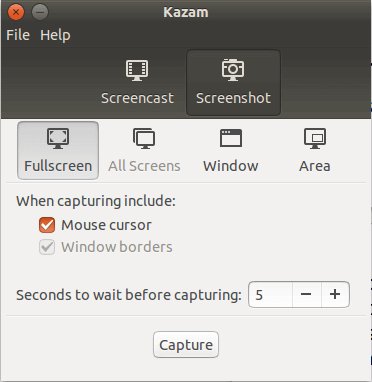 Gimp is Coded in C, GTK+ and distributed under GPLv3 license, FREE and open source image editor used for image manipulation, editing, resizing, retouching.
It provides you flexibility of expansion to the best using the scripting interface.
As a part of an image editing program, Gimp can also be used for taking partial and full window screenshots and edit the image for adding effects to it. 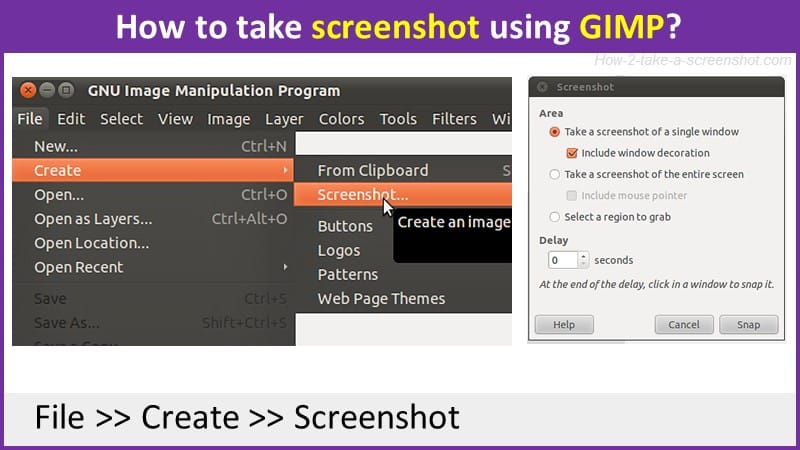 1) Open the Gimp GUI
2) go to File >> Create Screenshot >> Menu shown above will be seen >> Select suitable option >> Take Full or Partial Screenshot.
3) System will generate a screenshot, which then will be available on the GUI for editing, where you can edit the image, apply effects and share (as needed).
Go to Index

Deepin Scrot has some extra features that are currently not available in gnome-screenshot.
It is much powerful than default Gnome tool and much lighter than Shutter.
Again one more thing is that its a lightweight screen capture application used in Linux Deepin OS.
This tool facilitates addition of text, arrows, line and drawing onto the screenshot.
Scrot is tool developed by Tom Gilbert using C programming language, licensed under the BSD License and uses the imlib2 library to acquire and save images.
Note : Below mentioned commands are tested in Ubuntu 16.04 LTS, and scrot 0.8 version

$ scrot [options] [filename]
Note: The parameters in [] are optional.

When you run scrot without any command line options, by default it captures the entire screen as well as the captured file is saved with a date-stamped filename in the current directory.
However if you wish to customize the image file name and location, simply use the following command.
$ scrot [image-name].png
This command takes the screenshot of whole screen with all active windows and save in the file name & location provided by you in the command.

$ scrot -u
This command takes the screenshot of the currently focused window.

5) take screenshot of a particular window:

6) Include the frame in screenshot:

$ scrot -ub
Running this command, you can include the “frame” of the window.

$ scrot –quality [NUM]
$ scrot –quality 10
This command allows you to adjust the quality of the screenshot image at the scale of 1-100.
High value = high size and low compression.
Default value is 75, however the effect differs depending on the file format chosen.

$ scrot -m
Use above command to gran and join multiple screenshots.
Go to Index

ScreenCloud is basically a cloud based, free, open source, simple, easy to use and cross-platform tool for taking and sharing screenshots.
You can get ScreenCloud for Linux, Windows and Mac OS X.
Download and install ScreenCloud here 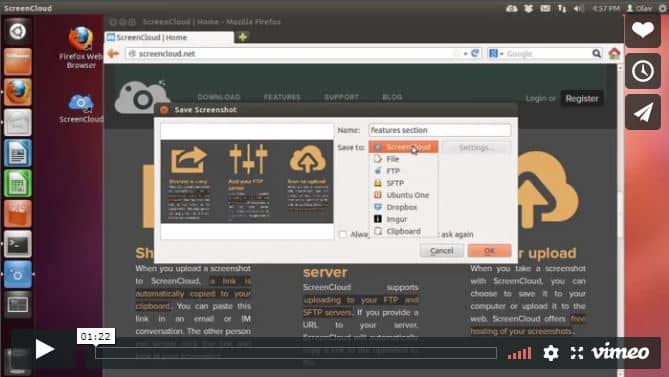 You can use 3 hotkeys or simply click the ScreenCloud tray icon giving you quick access to screen capture features!

Once you take a screenshot using ScreenCloud, just save it to your computer or upload it to the web.
ScreenCloud automatically uploads your screenshot to cloud services or your own server. If you provide a URL to your server, ScreenCloud will automatically copy a link to the uploaded file.

Share link will automatically copy screenshot to your clipboard. You can then paste the link in an email or IM conversation. And anyone accesses this link can see your screenshot.
Go to Index

Flameshot is a easy to use, free, open source, simple yet powerful tool for taking screenshots.
It also has its own fully customizable GUI as well as supports keyboard shortcuts.

Hope my list of methods on How do you take a screenshot on Linux? will be helpful to you. If you are using any new method, please do share it in comments below and I will include it in main section with due credits.
Cheers!